It’s spooky season! Fall is here and Halloween is right around the corner. I don’t know about you guys, but I try to celebrate Halloween for more than just the last day of October. And one of my favorite ways to celebrate is to get scared silly.

Last weekend I started off the Halloween season with a visit to Universal Studio’s Halloween Horror Nights. Out of the multiple Halloween attractions offered in Southern California, Horror Nights is one of my favorites. The mazes are fun and have that additional Hollywood magic that only Universal could really do right. And since they have certain licensing rights, they’re able to create mazes based on popular spooky movies and shows, such as The Shinning or Killer Klowns From Outer Space (a film that ruined clowns for me when I watched it at 5 years old. Do not recommend).

The visit to Universal Studios started off with a stop at Universal CityWalk and a bite to eat at Hard Rock Cafe. Then another stop for dessert at the popular (and on theme) Voodoo Donuts. The original Voodoo Donuts is based in Portland – I’ve yet to visit Portland, so I can’t say if the LA donut shop is any better or worse than the original. But judging it by its own merits, I’d say the donuts were pretty delicious!

We got to Universal around 5:30pm, ready to enter the park early. For newbies to Halloween Horror Nights, I highly recommend to get there for early admission. This way, you’re able to tackle the mazes on the lower lot before the lines get insane. 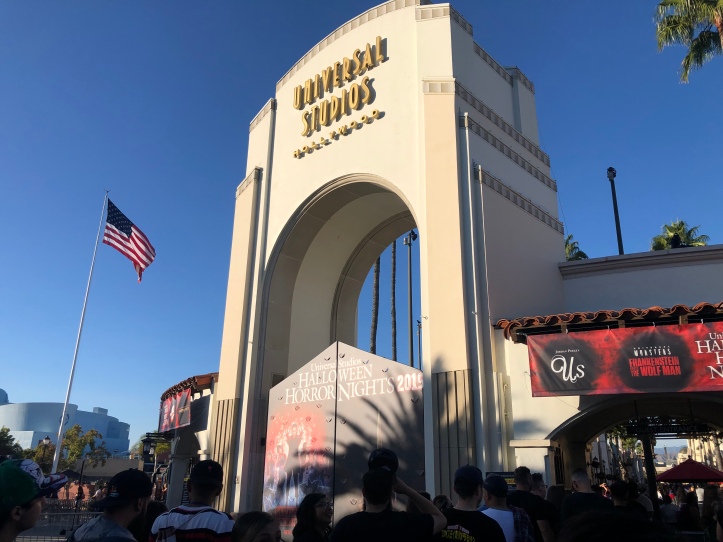 We didn’t get to check out all the mazes, but the ones we did experience were all pretty amazing. Out of the eight mazes, we went through:

• Ghostbusters: Probably my favorite maze purely for the nostalgia of one of my all time top ranked films. The maze wasnt scary at all, but I loved that it felt like you were in the movie, and the realistic-looking Slimer making a mess in the hotel hallway was great. I didn’t take any photos because I didn’t think they were allowed (found out later they just don’t allow flash photography) but I took a quick video of the entrance to the maze…

• Creepshow: This one was pretty cool, and featured realistic depictions of some of the more popular Creepshow stories. I screamed several times thanks to the Crypt  Keeper popping up out of nowhere.

• Frankenstein Meets The Wolf Man: Not a super scary maze, but as someone who grew up watching Turner Classic Movies, I greatly appreciated the throw back to the classic Universal horror monsters.

• Stranger Things: The maze was mostly based on Season 2 (but a little bit of Season 3 creeped in at the end), and was pretty well done with impressive special effects and acting. It wasn’t too scary, but there were some jump scares (and sprays of a mystery liquid) thanks to the Demogorgons. This maze probably had one of the longest waits of about 75 minutes or so.

• House of 1000 Corpses: I thought this maze was so well done and it brought back frightening memories of Rob Zombie’s film…a film that gave me nightmares but featured one of the most iconic performances in horror history thanks to actor Sid Hag as Captain Spaulding (R.I.P.).

•Holidayz in Hell: One of Horror Night’s original mazes, this one had a higher scare factor with lots of jump scares and frightening visuals. Starting with New Year’s Eve and ending with Christmas, each holiday is twisted to reveal its sinister side – killer Easter bunnies, dangerous 4th of July fireworks, Krampus, etc.

We didn’t get to check out the other mazes of Us, Killer Klowns From Outer Space (no thank you), and the other original maze called The Curse of Pandora’s Box. However, if you’re interested in what they’re all about I recommend checking out this Buzzfeed article that breaks down each maze.